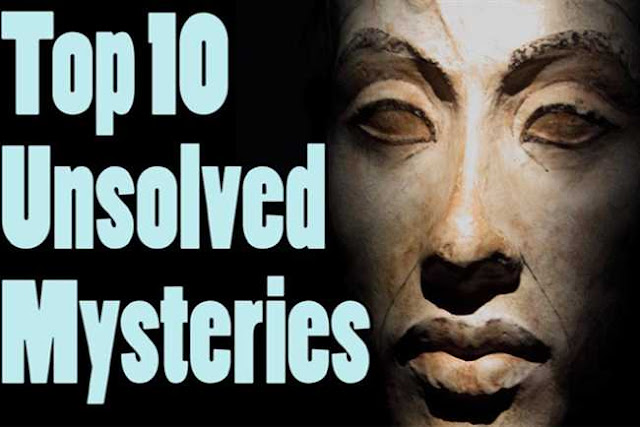 Every day millions of seemingly mysterious events that rapidly reveals exactly what is behind them. But there are several well-known unsolved mysteries that after many years, yet still suffering the greatest minds in the world. Nobody can argue with certainty exactly how the pyramids were built, why were cartoons in Nazca lines, or indeed whether Nessie lives in Loch Ness. Until appear solid evidence and facts on their (non) existence, it remains up to you to decide which theory to believe.


The biggest unsolved mysteries in svetotBigfut is best known for plashenjeto climbers and hunters in North America. Those who claim to have seen it described as being at a height of 2.3 meters, which resembles a monkey, but walks upright like a man. Scientists believe that they pick up such a great thing could remain hidden for so long, but it can certainly argue the opposite.


The biggest unsolved mysteries in svetotDobro famous Nessie mystery that first appeared in 1933. She supposedly lives in Loch Ness which is located in Scotland. It is believed that Nessie is a prehistoric creature. Scientists have not yet managed to find solid evidence of its existence, but the majority of the population around the lake, claimed that at least once he saw with his own eyes.


The biggest unsolved mysteries in svetotZa lost city of Atlantis was first discovered by Plato, 2,400 years ago claimed to be an island that has lived an incredibly advanced society. According to legend it is believed that the island sank after the earthquake and later became an underwater kingdom protected by mermaids. Where exactly was located this city and whether there is still unknown.


The biggest unsolved mysteries in svetotPiramidite in Egypt perhaps the greatest puzzle that man ever encountered. They are about 5,000 years old. The largest pyramid is high as a building of 40 floors and covers an area which could accommodate 10 football pitches. For its construction were used more than 2 million stone blocks, each of which weighs from 2 to 5 tons. Scientists believe that this type of structure in the time it would take about 400,000 workers and 20 years to complete.


The biggest unsolved mysteries in svetotMaite civilization is followed by many mysteries that may never be disclosed. Much of their culture is lost with time. Lately most actual mystery is their calendar frightened much of archaeologists. Some of them believe that the calendar predicts the end of the world in 2012, while others believe that it is incomplete records and misinterpretation of those found.


The biggest unsolved mysteries in svetotMokjnata Inca Empire ruled between 1200 and 1535 in South America. Their modern city was on top of a steep and hardly accessible mountain now known as Machu Picchu in Peru. This city was unique at that time who had drainage systems and channels through which span their crops. The creation of the city and the disappearance of an entire civilization is still a mystery.


The lines in Nazca


The biggest unsolved mysteries in svetotOvie lines covering an area of ​​approximately 500 square kilometers in the southern desert of Peru. Mysterious forms that are drawn to the country over 2,000 years. Some scholars believe that the people of Nazca drew messages of aliens, while another theory is that the drawings are quite accidentally produced by channels that transporting water.


The biggest unsolved mysteries in svetotBermudskiot triangle is considered as responsible for many disappearances. It is estimated that the region around the Bermuda Triangle swallowed more than 140 ships and planes, more than 1,000 people who have never been found. Many people believe in supernatural explanations. Scientists have no firm evidence of mysterious events in this area, but so far most promising theory of the strong magnetic effect that "confuses" the instruments and creates unusual weather events.


The Explosion in Tunguska


The biggest unsolved mysteries in svetotEksplozijata in Tunguska, Russia occurred in around 7:14 on June 30, 1908. To this day I still do not know what was the cause of the explosion that sramnila country with 80 million trees spread over an area of ​​2,150 square kilometers. Some locals believe that it is a black hole or UFO. But many scientists believe that the explosion occurred as a result of a meteor that fell even though there was no record of it.tongunska


The biggest unsolved mysteries in svetotKako just been brought these stone blocks and that order had been placed exactly on that place is still a mystery that may never be discovered. It is believed that this building dates back 5,000 years and until now most logical explanation is that according to scientists was used for various types of ceremonies.

World Biggest Unsolved Mysteries Every day millions of seemingly mysterious events that rapidly reveals exactly what is behind them. B...